I. Where is Virology Today?

Concerning SARS-CoV-2, there are a lot of reasons why the origin of the virus is still unclear, and whether or not pets and livestock can be infected and transmit SARS-CoV-2 also remains unclear.

Even though these are important public safety issues, according to the powers that be, they are still considered to be unknown scientific questions (Journal of Virology).


II. Where Virology Used To Be

Once upon a time the medical world, in terms of Virology, was accursed by a bit of pseudo-science:


"Koch's postulates have played an important role in microbiology, yet they have major limitations. For example, Koch was well aware that in the case of cholera, the causal agent, Vibrio cholerae, could be found in both sick and healthy people, invalidating his first postulate. Furthermore, viral diseases were not yet discovered when Koch formulated his postulates, and there are many viruses that do not cause illness in all infected individuals, a requirement of the first postulate."

(Koch's postulates, emphasis added).  A falsified hypothesis was a controlling factor back in the day, so now "we have improved into what?" one must wonder.


III. Where Is Virology Going?

Over a century later Virology, as it relates to mammals, is still suffering:


"In 1999, P. Griffiths broached the concept of commensal viruses, concluding in the speculative editorial that ‘we should not exclude the possibility that commensal viruses may exist’. Where are we, almost 20 years later?"

(The concept of commensal viruses almost 20 years later). It is a good question with a less than 'good' answer:

(Nature, emphasis added). This lack of attention has an impact upon, among other things, enteric (intestinal) Virology:


"Viruses affect host physiology beyond causing acute disease, thereby giving rise to the concept that the virome is a component of the microbiome. However, the role of the enteric virome is understudied relative to the fast-paced research examining commensal bacteria in the intestine. In this article, I discuss our recent work on murine norovirus indicating that an animal virus in the intestine can provide many of the signals to the host that have been attributed to commensal bacteria. Our findings suggest that the surge in microbiome research should incorporate examination of the enteric virome."

(Expanding the Role of the Virome: Commensalism in the Gut). How such important issues still remain understudied after 120 years is perplexing.


IV. Who Does The Lack Of Sufficient Study Benefit?

I pointed out several factors in the previous post of this series as to why research is not done on the 'factory farming agriculture' industry.

One factor is that all too often research funding is supplied by "interested parties", so in that sense the reason for the dearth in critical research is not a great mystery (On The Origin Of The Home Of COVID-19 - 10).

In important respects, it should be noted, Virology concerning flora has not suffered as badly from Koch's Postulates as other sections of the discipline have:


"Virus ecology takes a different look at viruses, from the standpoint of how they affect their hosts׳ interactions with the environment. Using the framework of symbiotic relationships helps put the true nature of viruses into perspective. Plants clearly have a long history of relationships with viruses that have shaped their evolution."

(Plants, viruses and the environment: Ecology and mutualism). The host of a plant virus is traced to a single-cell microbe, but the host of a virus in the animal factory realm is traced to what is really a meta-host.

Yes, a cow, pig, or chicken, for example, are considered to be "the host" when mammalian viruses are discussed (I call them meta-hosts).


"With the advent of the powerful and inexpensive next generation technologies for DNA sequencing, virus metagenomics has been rapidly expanding and transforming our understanding of virus diversity, ecology, evolution and taxonomy ... Although RNA viruses lag behind DNA viruses relative to the volume of the generated metagenomic data, substantial recent progress in this field challenges the existing concepts of RNA virus origins and evolutionary pathways. Thus, an attempt to re-evaluate these concepts appears to be timely."

(Metagenomics reshapes the concepts of RNA virus evolution by revealing extensive horizontal virus transfer). Again, as pointed out in the previous post of this series, big business and politics determine what to study and what not to (and how to use or not use what we have learned).

The warmongering psychology of the military ignores the reality that not all of the citizens of other nations are out to destroy us,  and the psychology of Virology ends up being a war upon all viruses:


"Although viruses are most often studied as pathogens, many are beneficial to their hosts, providing essential functions in some cases and conditionally beneficial functions in others. Beneficial viruses have been discovered in many different hosts, including bacteria, insects, plants, fungi and animals. How these beneficial interactions evolve is still a mystery in many cases but, as discussed in this Review, the mechanisms of these interactions are beginning to be understood in more detail."

(The good viruses: viral mutualistic symbioses). Fear and paranoia are not a good foundation for scientific research.

Not only that, the viruses compared to MT276327 & MN997409 were extracted from various mammals and humans from around the globe.

I think that readers, as I was, will be astounded at the exactness and near exactness of one virus DNA/RNA to another even though they were extracted thousands of miles from one another in many cases (not to mention the human to animal comparisons).

Here is the menu with links to the appendices:

VI. Where not to look for the home of SARS-CoV-2

That is, they are either about hosts of viruses (single-cell microbes) or about viruses themselves.

Each one mentions antibiotics and the dangers of overuse.

They focus light on the dynamics of antibiotics killing the single-cell microbe hosts of viruses (causing the viruses to be cast out of their habitat to become like a space ship that gets lost in the great depths of space).

The bottom line is that the "home" of SARS-CoV-2 is the single-cell microbe or microbes continually killed by antibiotics.

About six years I wrote:


We are also finding out that viruses and microbes are essential for human and other life forms:


Today, we are at the edge of a main turning point in understanding biological processes. The prevailing central dogma of molecular biology of the last 50 years is no more than a subordinate clause, relevant only to a small fraction of reality.
...
Now, the new renaissance of viruses is taking centre stage. Research data from the last decade indicate the important roles of viruses, both in the evolution of all life and as symbionts or co-evolutionary partners of host organisms. There is increasing evidence that all cellular life is colonized by exogenous and/or endogenous viruses in a non-lytic but persistent lifestyle. Viruses and viral parts form the most numerous genetic matter on this planet.
...
To understand their competence in natural genome editing, we have to look not only at their linguistic competence in editing and regulating correct nucleotide sequences, but also at their communicative competence, that is, how they interact with each other, how they compete within host organisms, how they symbiotically interact with host organisms to ward off 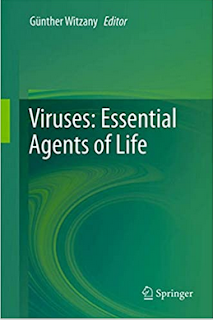 competing parasites, how they generate de novo sequences and what life strategies they share. Exactly these features are presented in this volume. Persistent infection lifestyles that do not harm hosts, and symbiotic, cooperating viral swarms, may be more successful in evolutionary terms for integrating advantageous phenotypes into host organisms than are “selfish” agents. Increasing empirical data about the abundance of viruses and virus-derived parts in the ecosphere of this planet, and their roles in the evolution and developmental processes of cellular life forms at the level of the microscopic processes of replication, transcription, translation, alternative splicing, RNA-editing, epigenetics and repair, raise a fundamental question concerning a crucial decision about how to define and explain life ...

(Viruses: Essential Agents of Life, at viii-ix; see also this). This we find out at a time when we are so paranoid about them that all we want to do is make war on them and quarantine those of us we think are the only ones exposed to them (Obola: Art Thou Dying Properly?).

(The Real Dangers With Microbes & Viruses). Six years ago seems so recent for some reason (because I really like sharing discoveries with others?).

So what have we, Dredd Blog readers and I, learned in the past six years?

Putting the three videos together, I note that:


(1) it takes a great number of pathogenic bacteria to mount a successful attack on us (Bonnie Bassler) and that the same reality goes for viruses, (2) we do not become sick until that happens (each person will tend to resist various quantities of pathogens, based on our individual immune system's capacity), (3) when we don't wear masks and subsequently pass pathogens to others, we do not pass the full amount it takes to cause the disease, but we add to the quantity (which may or may not add up to the critical number in that other person or persons), (4) the pathogens know when they have enough to do damage by way of communication (quorum sensing - bacteria; quorum sensing - viruses; see also this).