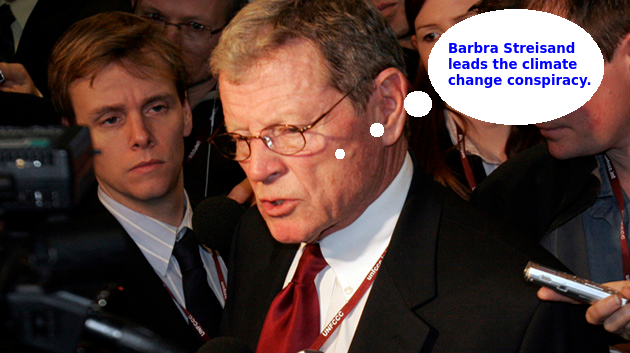 Big Jimmy Inhofe is not taking the deceit of his country by Barbie lightly.

According to the chair of the Senate Environment and Public Works Committee, he has to stop her.

Yes, he must stop one notorious Barbara Streisand, who, along with various co-conspirators in Hollywood, have wrecked many naive and innocent minds.

It is a national security threat, seeing as how she and her cohorts have deceived the Pentagon, 97% of the world's climate scientists, and even Al Gore.

By being a one-man troofiness squad taking the gospel straight to world climate change conferences so as to make sure they don't do anything ungodly.


[Inhofe goes to climate conferences] to be "a one-man truth squad." He slithered in and out of the cavernous media filing center, ever at the ready to speak to reporters looking for the other side quotes denigrating the proceedings, claiming that climate change was no more than a hoax, and celebrating the summit's failure to produce a binding and comprehensive treaty.

Inhofe was usually mobbed by reporters—especially non-American journalists who found it newsworthy that a US senator would say such things. Judging from the smile on his mug, Inhofe enjoyed skunking up the party. After watching this for a few days, I could not resist the urge to engage.

As he strolled through the media center one afternoon, accompanied by several camera crews recording his pronouncements, I approached and politely asked if I could put a question to him. Sure, he said, in his folksy, avuncular manner.

Look around us, I said, spreading my arms wide. There are thousands of intelligent and well-meaning people in this gigantic conference center: scientists, heads of state, government officials, policy experts. They believe that climate change is a serious and pressing threat and that something must be done soon. Do you believe that they have all been fooled?

That these people who have traveled from all points of the globe to be here are victims of a well-orchestrated hoax?

That's some hoax, I countered. But who has engineered such a scam?

Really? I asked. Why would they conspire to scare all these smart people into believing a catastrophe was under way, when all was well?

I pressed on: Who in Hollywood is doing this?

I nearly laughed. All these people had assembled in Copenhagen because of Barbra Streisand. A singer and actor had perpetuated the grandest con of the past 100 years?

That's right, Inhofe said, with a straight face. And others, he added.

By this point, he was losing patience and glancing about for another reporter who wanted to record his important observations. And I was running out of follow-up queries. After all, was I really going to ask, "And Ed Begley Jr. too?" So our conversation ended, and I headed back to reality.

But I was struck by this thought: Did this senator truly believe Barbra Streisand was the devious force behind a completely phony global campaign to address climate change? He seemed to.

In his 2012 book, The Greatest Hoax: How the Global Warming Conspiracy Threatens Your Future, Inhofe does mention Streisand—but only once, lumping her together with Leonardo DiCaprio and John Travolta as celebs whose environmental "alarmism" had to be debunked. But his book did not shy away from clearly identifying the charlatans and hoaxers who have hornswoggled the planet: "environmental activist extremists," Al Gore, MoveOn.org, George Soros, Michael Moore, and, yes, "the Hollywood elites."

Perhaps when Inhofe seizes the reins of the Senate environment committee, he can further expose this conspiracy—and for the first witness … Barbra Streisand. It's time for her to come clean.

(Mother Jones). Big Troofie Jim originally came to his puritanical senses while visiting the San Diego Zoo, and going to talk to a Navy Admiral whom Barbie had completely fooled (Has The Navy Fallen For The Greatest Hoax?).

Now that he has a pulpit and power, Barbie better find Ken and go back to that alien base on Ceres.
Posted by Dredd at 10:07 AM