There was a hearing in the House of "Representatives" recently.

It concerned the issue of The Damaged Global Climate System.

Inadvertently it also concerned The Damaged Mental Cognition of House of Representative Luddites.

But what amazed me was that both the scientist testifying for the White House and the House Luddite were off (the House Luddite was a galaxy off, the scientist was less off the mark - I think axial precession climate change should be a consideration in any really long-range climate models (e.g. 13,000 yrs.), but he thought such factors were de minimis).

The Luddite from Texas called the phenomenon of Axial Precession "Global Wobbling."

Since it is Friday, and since we do rebel science on Friday, I thought I would rebel against the Ignoratti in the House of Reprehensibles who prey for Amurka.

In today's post we look at the cycle of the axial precession in terms of current calendar months.

We offer a hypothesis that this is a built-in cosmic global climate system dynamic (a ~26,000 year cycle).

The graphic above shows one complete cycle of the Earth's axial precession, i.e. 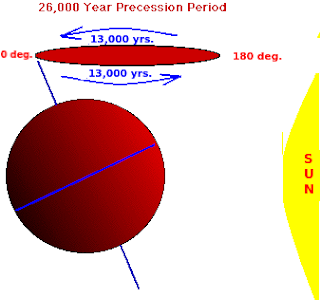 one "rotation" of the axial tilt.

Each degree,of the 360 degrees total, 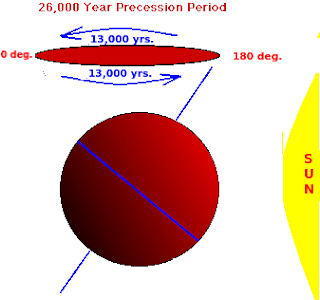 The following list of months and their seasonal characteristics, in terms of being a Winter, Spring, Summer, or Autumn month, is shown for each date marked at every 30 degrees on the graphic at the top of this post:

The gist of this is that about each 13,000 years (each 12,960 yrs. --at the time they developed it, to be more exact), the months of Winter in Washington, D.C. in the U.S.A. now (December, January, February) become the months of Summer (June, July, August) in terms of their seasonal type-of-weather orientation.

This happens because the axial precession reaches the maximum 180 degree
opposite tilt (either tilting toward the Sun, or the opposite, tilting away from the Sun) then returns to 0/360 degrees to begin another axial precession cycle anew.

It is not that the months change, no, they still have their 30, 31, 28/29. number of days per month, are still spelled the same, and January is still the first month while December is still the 12th month (etc.).

The quantity of the impact on weather in the northern hemisphere (temperature change, rainfall, ice melt, sea-level, etc.), as well as on the global climate system itself, will be considered in later posts in this series.

@14:30: The climate of one state is moving north to another state as it were: