Why Is The Government Conditioning Us To Austerity? - 2

In the first post of this series (Why Is The Government Conditioning Us To Austerity?) we speculated that all of the political circus generated by right-wing-nuts was contrived.

Not stopping there, we (Dredd Blog readers and I) wondered whether there were other motives or surreptitious reasons for the demented behavior of T-party nuts posing as adults that are competently governing federal matters on behalf of all Americans:


The talk in McTell News circles, generated from the scripts they have been given to read (as good "journalists") is all about what they have stupidly named "the sequester."

They would have done better to name it "the sequel" because it seems like an ongoing bad TV Show.

I have been wondering "why are they doing it?", because I have been reminded of the statement made by the military, following years of preparation, about how they would be used to battle with the public once the economy got so bad people took to the streets ...

(ibid). A noted economist and previous cabinet member is also expressing himself along those lines:


An old friend who has been active in politics for more than 30 years tells me he's giving up. "I can't stomach what's going on in Washington anymore," he says. "The hell with all of them. I have better things to do with my life."

My friend is falling exactly into the trap that the extreme right wants all of us to fall into -- such disgust and cynicism that we all give up on politics. Then they're free to take over everything.

(Their Real Goal, by Robert Reich, emphasis added). Before we get a bit more into it, let's remember that the fundamental core, yes, let's remember what those in Washington, D.C. who are doing this nonsense mean, as well as what they do not mean, by their use of the word "government."

First, note that the congress is polling at very low popularity numbers, while the military is polling in a very high regard:

(Stockholm Syndrome on Steroids? - 2). Second, note that Dredd Blog has for a long time seen what the warmongers think, as evidenced by their manic behavior in the current "debt ceiling", "government shutdown", and "austerity" propaganda.

Dredd Blog has long known that the neoCon right-wing-nut mania is against "ObamaCare" because health care has been said, by military people, to be the number one economic threat to the military.

This will be specifically pointed out later in this post, as well as the fact that their anger over health care is that it is a challenge to the military budget:


We spend more on the military than the other nations of the world combined, so perhaps if we brought it down to half that, such a line in the sand would make more sense, even though even at that level it is still a bloated military budget.

Thus, the common welfare requires a fair military and a fair populace who share the wealth of the nation in a manner that does not do damage to the nation. 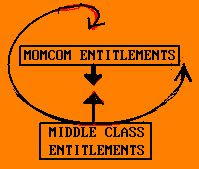 The democrats, it seems to me, have brought on a flanking manoeuvre by passing the Health Care Reform legislation.

They knew they could not take on military (MOMCOM) entitlements directly, because the populace has been filled with fear by MOMCOM security propaganda about the monsters under their beds.

So the democrats seem to have done a flanking motion going around and behind the propaganda.

Even if Health Care Legislation is flawed, still it signals a change in direction from mindless, endless warfare that saps the nation of its strength, toward a kinder and gentler nation that actually has compassion and other normal humane considerations for its own.

(Entitlement Wars - Guns vs. Butter). In fact Dredd Blog has for a long time pulled no punches when it comes to discerning the reality that your health care is considered to be their real enemy:


There are so many things that happen these days that when I tell people about them they will say "I can't believe that".

The issue of health care reform is only one of many issues where I can make the case.

Let me make the case by telling you that military thinkers believe that the number one enemy the military should fear is health care!

Now, unless you have researched this, you will exclaim "I can't believe that".

Let's look at what military scholars say by revisiting a Dredd Blog post from last March that focused on this issue:

(Deja Vu - Guns v. Butter Election Looms). I can't believe that either, but there it is, written in military white papers for all to see.

(Your Health Is Their Number 1 Enemy?!). The apparatus is in place to "fix the problem" if and when "they're free to take over everything", as Dr. Reich stated in his quote near the top of today's post.

We know what that "fix the problem" dynamic will look like:

(Will The Military Become The Police - 4). They don't want Americans to have health care like the other modern nations (ObamaCare: Good Foreign Policy) but they do want their warmongering generals to lead the feudal lives of vassals and kings while the serfs suffer:


Then-defense secretary Robert M. Gates stopped bagging his leaves when he moved into a small Washington military enclave in 2007. His next-door neighbor was Mike Mullen, the chairman of the Joint Chiefs of Staff at the time, who had a chef, a personal valet and — not lost on Gates — troops to tend his property.

Gates may have been the civilian leader of the world’s largest military, but his position did not come with household staff. So, he often joked, he disposed of his leaves by blowing them onto the chairman’s lawn.

“I was often jealous because he had four enlisted people helping him all the time,” Gates said in response to a question after a speech Thursday. He wryly complained to his wife that “Mullen’s got guys over there who are fixing meals for him, and I’m shoving something into the microwave. And I’m his boss.”

Of the many facts that have come to light in the scandal involving former CIA director David H. Petraeus, among the most curious was that during his days as a four-star general, he was once escorted by 28 police motorcycles as he traveled from his Central Command headquarters in Tampa to socialite Jill Kelley’s mansion ...

The commanders who lead the nation’s military services and those who oversee troops around the world enjoy an array of perquisites befitting a billionaire, including executive jets, palatial homes, drivers, security guards and aides to carry their bags, press their uniforms and track their schedules in 10-minute increments. Their food is prepared by gourmet chefs. If they want music with their dinner parties, their staff can summon a string quartet or a choir.

The elite regional commanders who preside over large swaths of the planet don’t have to settle for Gulfstream V jets. They each have a C-40, the military equivalent of a Boeing 737 ...

(American Feudalism - 3). There is an overwhelming abundance of evidence showing that, as General Clark said, a coup has taken place (A Tale of Coup Cities - 4).

President and once General Eisenhower would agree with General Clark:

(Wee The People - 2, quoting President Eisenhower). Thus, the warmongering neoCons in congress mean that "government" is anything that is "of the people, by the people, and for the people" (The Common Good), while they fund the military as if it is the solution to "government" problems.

Let's hope we are wrong about this appraisal (She's Come Undone), and that instead they will come to their senses.

The previous post in this series is here.
Posted by Dredd at 11:22 AM