The Damage Has Been Done - 7 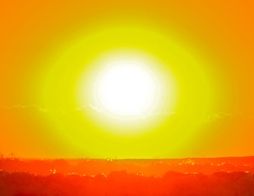 In this series we have been discussing various aspects of global warming induced climate change.

The context of the discussion is basically that once certain pollution benchmarks have been reached, e.g. CO2 pollution levels, consequences are determined much like a row of dominoes.

Knocking over that first domino, like reaching the pollution benchmark, will cause "the domino effect" to proceed until the last domino falls, even though nothing else has to be done to cause the domino effect to complete the entire sequence.

One reason why this metaphor fits is because the time involved from original pollution to its visible result can take an amount of time that is beyond our usual attention span.

As an example, note that Arctic Sea Ice Extent and Volume are setting world records even as we speak:


There are several scientific organisations that keep an eye on the Arctic sea ice cover and put out graphs to inform us of the amount of ice that is left.
...
After Uni Bremen sea ice extent and Arctic ROOS sea ice area another big domino has fallen with Cryosphere Today sea ice area ...
...
Though it happened 23 days earlier than it did last year, today's CT SIA value is already 27,281 km2 lower than last year's record (which itself only edged out the 2007 record by fewer than 15k km2). 17 days elapsed last year between the date the 3 million km2 mark was passed and the record was set; this year, that only took four days.

Over the course of the record--1979-2011--the average CT area loss from this day to minimum has been 521k km2. Based on a straight extrapolation from prior years, 2012 SIA would/could/almost certaionly will end up somewhere between 1.92 million and 2.77 million km2, with a mean minimum of 2.36 million km2.

(Arctic Ice Extent & Volume - Record dominoes). The record setting lack of ice extent and record decrease in volume this year are results of pollution events that began decades ago, and will continue for decades, even if we quit CO2 pollution today.

UPDATE: The NSIDC has reported that the old records have now been broken:

NSIDC scientist Walt Meier said, "By itself it's just a number, and occasionally records are going to get set. But in the context of what's happened in the last several years and throughout the satellite record, it's an indication that the Arctic sea ice cover is fundamentally changing."

(Arctic Sea Ice Breaks Lowest Extent On Record). The sooner nations go into emergency mode and quickly begin to limit CO2 the more catastrophe will be averted, catastrophe in the form of millions of deaths in upcoming years.

The previous post in this series is here.
Posted by Dredd at 8:16 AM