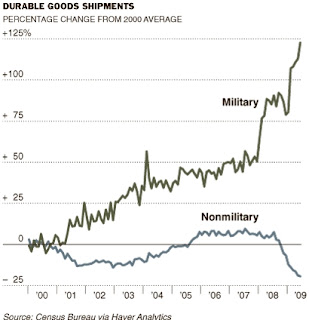 In the first post of this series about two years ago Dredd Blog began to notice graphs which tracked the increase of wealth of the 1%.

Regular readers know that we discussed how the increase in military spending closely matched the increase of wealth of the 1%.

In the second post of this series we quoted various economists who indicated that ongoing serious impairment of the economy.

Included were warnings that cities would begin to go bankrupt if the imperialism did not subside, and in fact more and more cities are filing bankruptcy as the policy continues to take a toll.

In the third post of this series we displayed a graph which shows that the income of the 99% has been decreasing as the wealth of the 1% increases.

In a parallel series about plutonomy in a plutocracy, we pointed out the stark reality of what has happened:


Let's revisit some numbers before we get into the dynamics of how this plunder of America has taken place:


Upon closer inspection, the Forbes list reveals that six Waltons — all children (one daughter-in-law) of Sam or James “Bud” Walton the founders of Wal-Mart — were on the list. The combined worth of the Walton six was $69.7 billion in 2007 — which equated to the total wealth of the entire bottom thirty percent!

(The Homeland: Big Brother Plutonomy - 3). This trend has been continuing at a rapid pace:


The six heirs to the Walmart fortune are worth as much as nearly half of all American households.

(Huffinton Post). One would expect, then, that imperialistic military adventurism of the type that bankrupted the Roman Empire, would have also continued:


Despite the rhetoric of consolidation and closure that went with this plan, in the post-9/11 era the Pentagon has actually been expanding its base infrastructure dramatically, including dozens of major bases in every Persian Gulf country save Iran, and in several Central Asian countries critical to the war in Afghanistan.

(The Peak Of The Oil Wars - 7). Military imperialism and its bankrupting runaway military spending continues unabated.

The nation continues in the W direction, the wrong direction, down the ill fated Highway 61.
Posted by Dredd at 8:47 AM