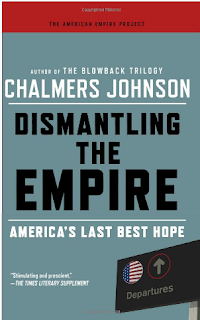 In the previous post of this series, regular readers know that we took a look at the Wartocracy.

Regular readers of Dredd Blog also know that "wartocracy" is the handle Dredd Blog has given to the militant, imperial institutions which the MOMCOM 1% use to rule the United States, and which they say they use to "keep the crazy animals around the world in their cages."


By 1990, the value of the weapons, equipment, and factories devoted to the military was 83% of the value of all plants and equipment in American Manufacturing. From 1947-1990 the combined US military budget amounted to $8.7 trillion ... Military industries crowd out the civilian economy ... and lead to severe economic weakness.” Consider that the US military is now spending over $1 trillion per year including all black and related expenses, which is more than the entire rest of the world combined. The next biggest spender is China at $91.5 billion according to Chinese figures. Johnson summarizes, “Devotion to military Keynesianism is, in fact, a form of slow economic suicide ..."

(Dismantling the Empire, by Chalmers Johnson, emphasis added). The author of that book, a staunch republican conservative, also has this background:


Chalmers Ashby Johnson ... was an American author and professor emeritus of the University of California, San Diego. He served in the Korean War, was a consultant for the CIA from 1967–1973, and chaired the Center for Chinese Studies at the University of California, Berkeley from 1967 to 1972 ... He was also president and co-founder of the Japan Policy Research Institute ... an organization promoting public education about Japan and Asia ... He wrote numerous books including, most recently, three examinations of the consequences of American Empire: Blowback, The Sorrows of Empire, and Nemesis: The Last Days of the American Republic.

(Wikipedia). A few more reviews of his last book, and/or comments about the author, are available here, here, here, and here.

The next post in this series is here, the previous post is here.
The Fugs, Virgin Forest ...