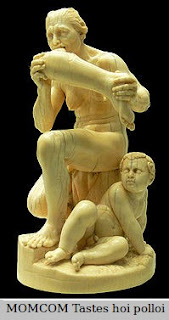 We pointed out that the 1% used the media to pull off this plunder with the form of "communication" known as propaganda, all the while calling it "journalism", "entertainment", or "the media".

Let's revisit some numbers before we get into the dynamics of how this plunder of America has taken place:


Upon closer inspection, the Forbes list reveals that six Waltons — all children (one daughter-in-law) of Sam or James “Bud” Walton the founders of Wal-Mart — were on the list. The combined worth of the Walton six was $69.7 billion in 2007 — which equated to the total wealth of the entire bottom thirty percent!

We pointed out that those ~100,000,000 Americans are in poverty or on the edge of poverty, one paycheck or less away from falling through to financial ruin, something those six of the 1% won't worry about.

Is this concentration of power a result of equal opportunity and fair play, the supposed ethic of the Amercian Dream, or is it the result of a nightmare war on America that functions as Social Kuru, the social disease of financial cannibalism?

It is all of the above, but none of it is healthy or stable according to the Wall Street Journal (WSJ):


The data may be a further sign that the U.S. is becoming a Plutonomy – an economy dependent on the spending and investing of the wealthy. And Plutonomies are far less stable than economies built on more evenly distributed income and mass consumption. “I don’t think it’s healthy for the economy to be so dependent on the top 2% of the income distribution,” Mr. Zandi said. He added that, “In the near term it highlights the fragility of the recovery.”

(The Graphs of Wrath, quoting WSJ, emphasis added). The heart, mind, and spirit of the method and means the 1% use has been known all along:


"One of the most important comments on deceit, I think, was made by Adam Smith. He pointed out that a major goal of business is to deceive and oppress the public.

And one of the striking features of the modern period is the institutionalization of that process, so that we now have huge industries deceiving the public — and they're very conscious about it, the public relations industry. Interestingly, this developed in the freest countries — in Britain and the US — roughly around time of WWI, when it was recognized that enough freedom had been won that people could no longer be controlled by force. So modes of deception and manipulation had to be developed in order to keep them under control"

(The Deceit Business, quoting Noam Chomsky). The institution that controlled the people by force previously, the militant institution, became the propaganda masters going forward, deceiving the public into thinking that the militants were the most competent American institution.

The citizen journalist is now the antidote to the social kuru, but it is a weak force than can only talk about and reveal the issues which the 1% media will not reveal and talk about.

The next post in this series is here, the previous post is here.
Posted by Dredd at 5:17 AM