Why is Obama's job approval rating polling lower than any president in modern history at this time?

Did he leave his base behind, taking them for granted, and did the independents change their mind about him?

The Gallup Poll seems to indicate yes to those questions.

Once upon a campaign promise, candidate Barak Obama indicated that he was going to bring green change to the nation, starting in Washington, D.C., but it seems now that he was talking about getting green bucks for his campaign from the 1% this time, not from the 99% who elected him.

A change toward the green environmental direction has not happened, because from the day Obama was baptized into the Oilah Akbar religion during the Deepwater Horizon revival, he has become more and more an enemy of the Earth, following the W direction, following the oil baron Bush II:


Barack Obama has been just as zealous as George Bush in stripping away environmental, health and safety protection at the behest of industry, it turns out.

Some environmental organisations were beginning to suspect this, after Obama over-ruled his scientific advisors 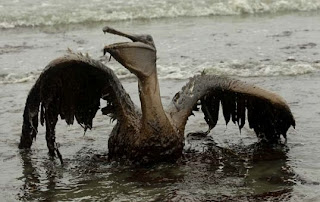 and blocked stronger ozone standards. Now, a new report [pdf] from the Centre for Progressive Reform has dug up some key data revealing that the White House in the age of Obama has been just as receptive to the pleadings of industry lobbyists as it was in the Bush era. And it goes far beyond ozone.

Under Obama, a little known corner of the White House - known as the White House Office of Information and Regulatory Affairs, or Oira - has changed more than 80% of the rules proposed by the Environmental Protection Agency.

None of these were changes for the good, the report says.

"Every single study of its performance, including this one, shows that Oira serves as a one-way ratchet, eroding the protections that agency specialists have decided are necessary under detailed statutory mandates, following years — even decades — of work."

(Guardian). He said he would put an emphasis on science, but he ignored the weather catastrophes being caused by decades of ignoring science, and truth be known, doing worse than those before him in some cases.

While Vermont considers rerouting rivers, while the national power grid rusts, while the oil wars are increased, and the dots have been connected, Obama has been full steam ahead in the W Direction.

Obama must root for the right wing of the Republicans right now, because if a candidate like Huntsman won the Republican primaries Obama would be defeated.

At this time, it does not look like the Republicans will let him down.

The previous episode is here.
Posted by Dredd at 6:45 AM