Recently the NASA Dawn Mission succeeded in placing a research satellite into orbit around the asteroid Vesta.

The photo to the left is one of the first photographs to be taken of Vesta, then sent back to mission specialists here on Earth for comprehensive analysis.

Immediately after the first photographs began to arrive from the Dawn spacecraft, mystery manifested once again, because what scientists saw was not exactly what they expected to see.

Notice the strata lines visible on the lower-left side of the photo of the asteroid Vesta, circling around to the middle-top of the photo (right mouse click for a larger view).

As it turns out, the asteroid Vesta is similar to a moon of the planet Mars, Phobos, in that both of them have strata lines.

We discussed the surprising, mysterious strata condition found on Phobos in the original post of this series:


Generally strata are laid down by the effects of erosion, either by liquid, atmospheric winds, volcanism 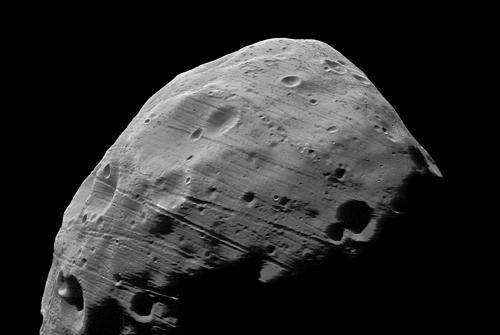 of various sorts, or a combination of any or all of those over a long span of time.

If these lines are that type of strata, then it is likely that a very long time transpired during which the deposits that make up the strata were laid down.

Obviously that does not happen on any asteroid, or similar body, nor would such lines be at an angle opposite the gravitational direction as is the case in the photo.

(Weekend Rebel Science Excursion). You can right mouse click on the photo of Phobos for a larger view, or go to the original post for even larger views.

We know that strata on the surface of a planet (think of The Grand Canyon for example) are laid down there over large spans of time by water and/or wind.

Those strata lines are laid down by the help of the pull of gravity, which causes the strata to be conformed to the shape of the planet's surface.

Because gravity pulls toward the surface of a planet, strata are not laid down vertically (as they show up on Vesta and Phobos) because the force of gravity naturally lays them down horizontally onto the curved surface of the planet.

In the original post we discussed the Exploded Planet Hypothesis (EPH) or theory (EPT) that a planet originally existed in the gap area between Mars and Jupiter:


But is it a chunk of the now missing planet which once filled the great gap between Mars and Jupiter, where now there are only asteroids remaining in the junk yard of rock and debris we call the asteroid belt?

A now missing planet which exploded and left the chunk in the photo to be caught by the gravity of Mars, and to then become a moon of Mars?

The EPH or EPT is an old idea which has been subscribed to by some good astronomers, who were of course criticized by their fellow astronomers because they did not follow the crowd to accept the theory pronounced "okay" by the government.

(ibid). These non-horizontal strata lines shown in the photos above indicate that Vesta and Phobos could be chunks of a large planet that once existed in

what is now called "the asteroid belt" between Mars and Jupiter.

The photo to the right is of a stratified island near La Paz, Baja California Sur, Mexico.

If the Earth exploded and that island was blown into space, in time it would wear down, dust would smooth it out some, fragmentation would tend to make it more round, and the strata lines on it over time would morph to then look similar to those on Phobos and Vesta in the two photos above.

A graphic to the right shows the island in black and white and rotated as it would do while floating in space. 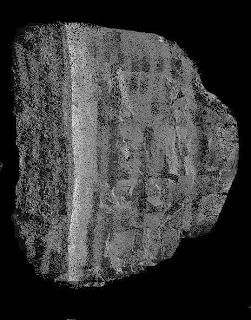 This gives some indication of how the surface of a planet containing strata would appear after being blown into space as huge chunks.

Some of those chunks would be as large as a thousand miles wide, while others would be as small as an island a few hundred feet across.

That is exactly how the asteroid belt is situated today.

A planet originally located in that asteroid belt gap area would be in accord with the Titius-Bode Law of Planetary Spacing, because, according to that law a planet should be there, but only debris in the form of asteroids is there now.

Hence the Exploded Planet Hypothesis, as explained and argued a bit more here.

In closing, note that the EPH is sometimes criticized merely because establishment scientists don't know how a planet could explode.

For instance, a car blown to smithereens has fenders, doors, wheels, engine, and other parts strewn about, but they are not in and of themselves always conclusive proof of anything but an explosion.

The explosion itself could have been a bomb (in the trunk, under the hood) the gas tank exploding, getting hit by a military tank at high speed, a tornado direct hit, or simply caused by driving over a land mine.

To the same effect, the residue in the form chunks of debris (with strata) we call asteroids is sufficient evidence of the explosion.

A video of Vesta rotating shows that the strata lines go all the way through the asteroid.