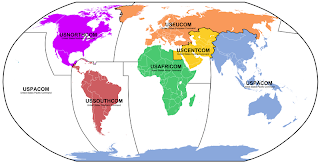 The graphic to the left shows the world wide command structure of MOMCOM (click to enlarge).

That is: USNORTHCOM, USSOUTHCOM, USCENTCOM, USEUCOM, USAFRICOM see also this, and USPACOM (which are all part of the size of government) [NOTE: Since this page was posted by Dredd Blog on 8/4/2011, the military has changed or removed these web pages, the Wayback Machine versions of that time have been inserted (if available) to replace these current pages: USNORTHCOM, USSOUTHCOM, USCENTCOM, USEUCOM, USAFRICOM, and USPACOM].

But what is missing from this grandiose picture of a worldwide military command and control structure?

For one thing, the above list does not include USSPYCOM, which spies on everyone everywhere, including American citizens.

What is also missing from that picture is the story of the participation of MOMCOM in 120 or so nations where daily acts of war are conducted:


Somewhere on this planet an American commando is carrying out a mission. Now, say that 70 times and you’re done ... for the day. Without the knowledge of the American public, a secret force within the U.S. military is undertaking operations in a majority of the world’s countries. This new Pentagon power elite is waging a global war

whose size and scope has never been revealed, until now ... One of its key components is the Joint Special Operations Command, or JSOC, a clandestine sub-command whose primary mission is tracking and killing suspected terrorists. Reporting to the president and acting under his authority, JSOC maintains a global hit list that includes American citizens. It has been operating an extra-legal “kill/capture” campaign that John Nagl, a past counterinsurgency adviser to four-star general and soon-to-be CIA Director David Petraeus, calls "an almost industrial-scale counterterrorism killing machine."

(Nick Turse, Huffington Post, emphasis added; see also USSOCOM page which is now USSOCOM). If you watched the news about The Libyan War you would have seen the fruits of USSOCOM labor, since their primary operation now is the oil wars.

In their minds they are practicing the art of war, but our founders did not consider jingoism to be an American tradition.