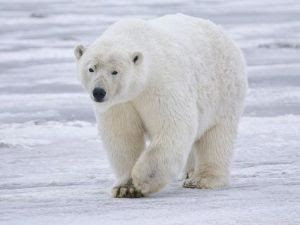 About two anniversaries ago Dredd Blog posted The Science Police, which many thought was a parody.

It wasn't, it was about an actual department within the federal government that polices various scientists in the USA.

Today we discuss the same issue, except that it refers to the science police in another department within the government.

One organization, Public Employees for Environmental Responsibility (PEER), considers the criminal investigation into a paper written by a scientist to have been instigated by MOMCOM, so PEER filed a complaint.

PEER fears that the science police want to cover up the great folly of petroleum usage in the world:

... an environmental watchdog group believes that the real reason for the investigation is pressure from oil and gas interests who see polar bears as pests that stand between them and the vast mineral reserves deep beneath the Arctic.

The details of the investigation are odd, to say the very least. On February 4, 2011, Monnett received a request for an interview from Eric May, a criminal investigator with the Office of the Inspector General at the Department of the Interior. May and another agent interviewed Monnett on February 23, 2011, in the Anchorage office of BOEMRE.

From the transcript, provided to Mother Jones by Public Employees for Environmental Responsibility (PEER), it's clear that the interview focused largely on the polar bear paper, with the agents asking questions about his methodology and conclusions. The paper, published in the journal Polar Biology in 2006, documented four dead polar bears in the Beaufort Sea during the course of an annual whale survey in September 2004. It was the first paper to document dead bears, and Monnett and his coauthor projected that there would likely be an increase in bear deaths as sea ice declined in the region. During their conversation, Monnett noted that the paper was reviewed both internally at Minerals Management Service (now known as BOEMRE) and by scientists outside of the agency, and it was approved by MMS management before they submitted it to the journal. At the journal, it was reviewed by three anonymous peer reviewers and approved for publication.

(The Bare Police). In the same manner that Charles Blow detected African American soldier history propaganda coming out of MOMCOM's portion of Hollywood, environmental groups likewise have noticed a massive campaign to slander scientists in order to deny the environmental catastrophes already here doing trillions of dollars of damage to the USA.

The propaganda arm of the government of the government wants the public to be unaware that they are mass murderers, so they corrupt the science police just like organized crime has traditionally done to police departments.
Posted by Dredd at 8:13 AM