Is War An Art or Is War A Disease?

The founders of The United States of America, especially the one who wrote The Bill of Rights, and is called "the father of the Constitution", declared that war is a disease.

Not only had he been in on the very beginning of the nation, on getting it off to a good start, later he was in the Cabinet of a president, as Secretary of State.

As if that was not enough, later he was elected by his constituents to be in the congress for a while.

Then, to top it all off the people even elected him to be President of the United States of America!

If that saying of James Madison is a true saying, since we have had open warfare for the past decade, would that be enough time to test the Madison hypothesis a bit?

Lets get right to the gist of it by analyzing some recent comments by those who spend their entire lives in war or in the preparation for war: 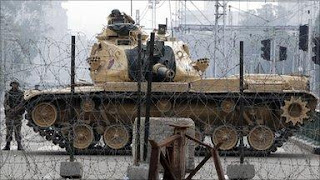 (The Government of The Government, emphasis added). The plans are in place and will be used if what they consider to be too many people complaining (about the economic state of affairs, in a manner they do not like) should take place?

That sounds sick to me.

The U.S. Army War College no longer teaches that war is the worst disease, it now teaches that "war is an art", yes, they see themselves as masters of war, masters of fine art.

And if there isn't enough to go around after all the art of war is funded, if you complain about it The U.S. Amy War College will send an art brigade your way so you can learn to appreciate their art, or else.

Ok, one more, then lets go back outside and play pretend everything is hunky dory in the Absolute USA:

(The Enemy the Pentagon Should Fear Most: Health Care, National Defense Magazine). We have been pointing out this very strange ideology for a while now, using "MOMCOM" symbolism to isolate the militant energy fighting against the middle class and poor in the United States.

(Deja Vu - Guns v. Butter Election Looms, emphasis added). You might be wondering how this "war is art" meme began.

It began with the teachings of a Chinese general who wrote a book "The Art of War" which eventually found its way into the libraries of The U.S. Army War Colleges.

It then infected the minds of the students of war, the "artists" who do war, who once upon a time would have been doctors learning how to prevent the disease of war.

Now, instead they get a degree in the Chinese philosophy, not the original American philosophy:

3. The art of war, then, is governed by five constant factors, to be taken into account in one's deliberations, when seeking to determine the conditions obtaining in the field.

5,6. The Moral Law causes the people to be in complete accord with their ruler, so that they will follow him regardless of their lives, undismayed by any danger.

8. Earth comprises distances, great and small; danger and security; open ground and narrow passes; the chances of life and death.

9. The Commander stands for the virtues of wisdom, sincerely, benevolence, courage and strictness.

10. By method and discipline are to be understood the marshaling of the army in its proper subdivisions, the graduations of rank among the officers, the maintenance of roads by which supplies may reach the army, and the control of military expenditure.

(The Art of War, see also this, this, and this). So, since your health is their enemy then you are their enemy, and since art is expensive, if you complain in the streets about not having a home, job, or food, they will capture your country whole and intact, because that is considered to be supreme excellence in their "art of war".


"The Moral Law causes the people to be in complete accord with their ruler, so that they will follow him regardless of their lives ...

The Commander stands for the virtues of wisdom, sincerely, benevolence, courage and strictness ...

By method and discipline are to be understood the marshaling of the army in its proper subdivisions, the graduations of rank among the officers, the maintenance of roads by which supplies may reach the army, and the control of military expenditure."

(ibid, links added). That the art of war even controls the building of the roads explains a lot about our infrastructure?

Yeah, James Madison, I get your drift.

The next post in this series is here.
Posted by Dredd at 8:34 AM