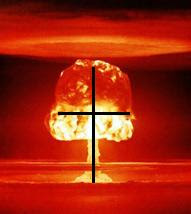 In All Truth is Local we said "Sometimes, at the extremes, one person's truth is another person's lie".

In point of fact, it is sometimes very difficult to imagine how anyone could be so serious, so dedicated, so "into" some beliefs.

That is why the U.S.A. has so many "states", which were originally called "experiments", because each state or experiment was allowed to develop its own version of truth in the form of laws, government, education, and state truth.

But some beliefs can be so unfathomable to us that we sometimes write them off by concluding that anyone who professes such a belief "must be lying to themselves".

For example, take the guys who say today is the beginning of "The End of The World", whatever that means, or words to that effect:

But "it’s no laughing matter," Camping told The Huffington Post. “It is not something where it's a tiny, tiny, tiny chance it may happen. It is going to happen.”

He and his fringe group of churchless followers

believe that at 6 p.m. on Saturday, May 21, a massive earthquake will make its way around the earth, beginning in Fiji and New Zealand. Graves will open and two hundred million 'saved' individuals will float up to heaven. The doomed remainder will live on an unruly earth for five months before God annihilates it five months later.

(Harold Camping). Another term for the expected event is "judgment day", I suppose, like in The Terminator sci-fi movies.

The Ecocosmology Blog has noticed the similarities intermingled with disparities in both scientific and religious realms of doom rhetoric:

Science says our star the sun will destroy the earth in the future, but there is a way out.

We must go into the heavens and find another home planet to live upon.

(Message of Science & Religion - Western). A planet-wide all consuming catastrophe is a subject which both science and religion address in various ways.

Judgment day, it's not exclusive to religion, courts, or science anymore.

UPDATE: It is Sunday already in Fiji and nothing earthshaking has happened.

Mr. Camping may be starting another "great disappointment" movement:

The Great Disappointment was a major event in the history of the Millerite movement, a 19th century American Christian sect that formed out of the Second Great Awakening. William Miller, a Baptist preacher, proposed based on his interpretations of the prophecies in the book of Daniel (Chapters 8 and 9, especially Dan. 8:14 "Unto two thousand and three hundred days; then shall the sanctuary be cleansed"), that Jesus Christ would return to the earth during the year 1844. A more specific date, that of October 22, 1844, was preached by Samuel S. Snow. Thousands of followers, some of whom had given away all of their possessions, waited expectantly. When Jesus did not appear, October 22, 1844 became known as the Great Disappointment.

(The Great Disappointment). I hope no-one does anything to harm anyone else because of strong, mistaken beliefs.
Posted by Dredd at 5:45 AM