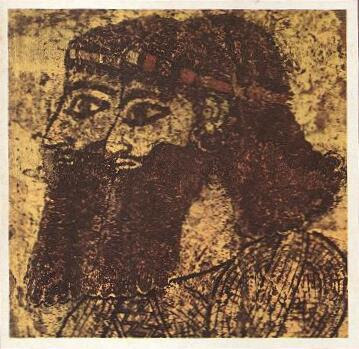 The author H.W.F. Saggs wrote about ancient civilizations that existed some 4,000 years before the discovery of oil:

"My main purpose will be served if I succeed in convincing some of my readers, amongst the many now interested in ancient world, that Babylonian and Assyrian civilisation is not wholly alien to our own."

(Everyday Life in Babylon, italics added). You and I have already used some of their thinking in our everyday pursuits in our world today:

"The Babylonian system of mathematics was sexagesimal, or a base 60 numeral system (see: Babylonian numerals). From this we derive the modern day usage of 60 seconds in a minute, 60 minutes in an hour, and 360 (60 x 6) degrees in a circle."

(Babylonia, italics added). I am sure there are many people who feel that there was no human culture or life on earth before the discovery of oil, and that oil is what makes culture possible.

But ancient cultures had laws, commerce, international trade, religion, art, and a comfortable life for many.

Some educators indicate that we can find then use a better way to analyze and define culture:

Many people would like to conceive of history as a succession of movements or stages in an on-going (and, generally) ever-improving cultural novel of human life ... try not to measure others against your own cultural standard, which has, in many ways, formed you and your apprehension of the world.

(Exploring Ancient Culture). There are no doubts that culture in some places today is foreign to other cultures in other places, but on the other hand some cultures today do have similarities with other cultures.

Also today's ideas can completely be in accord with ancient ones:

"Love the world as your own self; then you can truly care for all things." How appropriate this injunction is today, when many people worry that they must care for the physical environment that must, in turn, care for them.

The infamous ideology that leads to a strategy where we have to destroy the village in order to save it is not the best culture, it is in fact the worst.

Sending the fleets and troops around the globe to seize oil by various means in order to save our oil culture will end up destroying the culture as the environment is destroyed:

Controversies among climate scientists concern the magnitude of the warming, not whether or not it is occurring.

(Scientific Case - Global Warming). The general consensus is that the oil culture will go away one way or another whether we like it or not, but exactly when that will happen is open to some legitimate debate.

The phrase "global wierding" describes strange climate phenomena happening around us as our oil culture seems to be hell-bent on remaining always "the oil culture", but global wierding also describes the way we react to civilization's oil addiction.
Posted by Dredd at 6:13 AM