A Methanol Economy Way Out Of Here - 2 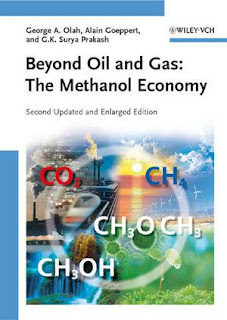 In the first post of this series, we touched upon the subject of methanol as well as "a methanol economy".

Of course methanol was confused with ethanol as usual, but the two are worlds apart, even though they are from the same chemical "family".

We are already covering, in another Dredd Blog series (The Peak of The Oil Wars), the military invasion type of economic wars that are taking place world wide, or have already taken place, but are now presented in the corporate media as aftermath.

The graphic above is the cover of a book written primarily by Nobel Prize winning scientist Dr. George Olah, a book which has been reviewed in technical publications.

For those who don't want to read a book about it, there is a Wikipedia Article that deals with the issue.

This morning the program Morning Joe, on MSNBC, continued the long term propaganda campaign designed by its owners, General Electric (GE), which is "owned" by the Pentagon.

We also characterize the oil baron side of the economic wars as MOMCOM in a previous series.

The battle lines show that MOMCOM has the other side outnumbered a hundred to one, meaning that civilization as we know it is not represented equally and fairly in these wars, so civilization will lose this war.

The irony is that as civilization goes down it will take MOMCOM down with it, sorta like a mass murder-suicide case.


Sometimes I feel so low-down and disgusted
Can't help but wonder what's happening
to my companions
Are they lost or are they found,
have they counted the cost it'll take to bring down
All their earthly principles
they're gonna have to abandon ?
There's slow, slow train coming up around the bend.

All that foreign oil controlling American soil
Look around you,
it's just bound to make you embarrassed
Sheiks walking around like kings,
wearing fancy jewels and nose rings
Deciding America's future
from Amsterdam and to Paris
And there's slow, slow train coming up around the bend.

Well, my baby went to Illinois
with some bad-talking boy she could destroy
A real suicide case,
but there was nothing I could do to stop it
I don't care about economy,
I don't care about astronomy
But it's sure do bother me
to see my loved ones turning into puppets
There's slow, slow train coming up around the bend.

(Slow Train, Bob Dylan). In conclusion, the bottom line is:


1) there are methanol, ethanol, solar, wind, and other ways to avoid the demise of current civilization,

2) MOMCOM rejected them in favor of an oil addiction death,

3) which shows MOMCOM is criminally insane,

4) MOMCOM has the blood guilt on its hands for the murder of an entire civilization.

The guilt belongs to all governments of all nations who do not want to end their denial, and who choose triage as the future of their countries.