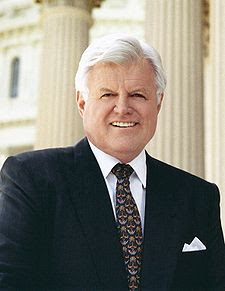 The second most senior senator in the U.S. Senate passed away at home.

We wish the family well and respect their privacy.

He was elected in the 1962 election to replace the senate seat that had been held by his brother who became President John F. Kennedy; he was re-elected seven times after that, equating to eight six-year terms of office.

He was 77 years old and was taken by brain cancer which had troubled him for the past year or so.

Of the thousands of votes he took part in, his own words described his best vote:

KING: You called Iraq the overriding issue. You voted to go there or not?

KENNEDY: No. The best vote I cast in the United States Senate was...

KING: In your life?

KING: Was not to go to Iraq?

KENNEDY: Yes, not to go to Iraq.

(Larry King, emphasis added). All the hundreds of billions wasted in Iraq against his will would have paid for universal health care reform he worked so hard to make a reality.
Posted by Dredd at 5:38 PM