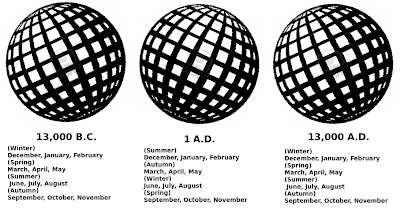 Yesterday's post in this series discussed the transition that takes place in the global climate system during the axial precession cycle of about 26,000 years.

The change in long-term tilt toward or away from the Sun causes a morph of global climate --a morph which Dredd Blog argues is significant enough that it must be considered when looking at the geological record for clues concerning the history of climate or weather at a given time.

This is especially so when the geological record is being used as a way of validating computer models of historical climate and weather --as a paper cited to in yesterday's post has done (The Multimillennial Sea-level Commitment of Global Warming).

This is because the ~26,000 year rotation is a typical 360 degree rotation (see A Savvy Ecocosmological Earth Calendar - 2).

The cycle repeats itself ad infinitum over eons of time as the tilted axis of the Earth moves in its slow circle of rotation (see video below).

Notice that the globes in the graphic above lean so as to emphasize the axial tilt's particular location at that given time around the circle (0 degrees, 180 degrees, and 360 degrees).

This is done to show that about each 13,000 years the tilt is at an an opposite tilt position (180 degrees away), with respect to the Sun, from what it was 13,000 years earlier.

That part is easy to conceive in the abstract, however, the impact it has on the global climate system, the biosphere, the environment, and human civilization is more complex and therefore more difficult to envision.

We know that the natural climate morph would cause plants and animals to have to migrate to and fro, would cause sea levels to rise and then fall, would cause ocean currents to change direction, and in general would cause a radical transition to eventually take place.

But note emphatically that this discussion assumes no anthropogenic interference in the natural cycle caused by various types of pollution now going on (we are talking about a natural, long term process, not man-made global warming).

And note especially that this climate system morph is a very slow process of change that allows the flora and fauna in the Earth's ecosystem to slowly and naturally adjust and adapt.

Additionally, remember that some locations will experience greater degrees of change depending on their latitude, but this post is intended only to set forth a generalization, using the general climate of the mid-latitudes of the U.S.A. for the general concept and general location.

Other locations such as Australia, have opposite months in the Winter column now (U.S.A. Summer months equate to Australian winter months).

Thus, during the morph we are talking about, Australian Winter months will change to Summer months, during the example cycle shown, while U.S.A. months do the opposite.

As a final thought for today, consider that the following quote from a related post (concerning use of the Mayan Long Count Calendar that also has a ~26,000 year cycle) highlights the incredible importance of the information being conveyed:


Thus, the Long Range Calendar would divide the 26,000 Tuns into five segments of 5,200 Tuns each, which would give such a calendar the utility to help civilizations determine when and how ecocosmological climate change, i.e., natural cosmic climate change would take place in the different hemispheres of the Earth.

Why is that important?

Because it would tell, among other things, when polar ice caps would naturally melt to cause natural sea level rise that would flood coastal areas, when the poles would naturally ice over to again cause natural sea level drop once again, how the flora and fauna would begin to adapt as those climate changes gently and slowly began to take place, as well as many other fundamental things civilizations need to know to happily survive on a planet like the Earth (see e.g. this and this).

Wise civilizations would use a long term calendar for long term planning in terms of zoning, when and where to build, when and where not to build, how to build for the current and next cycle, and therefore how to avoid a lot of waste, destruction, loss of life, as well as avoiding great, unnecessary expense.

[This all assumes that any Earth civilizations would not cause anthropogenic global warming induced climate change, as current civilization already has done, to a very reasonably predictable Earth environment.]

(A Savvy Ecocosmological Earth Calendar). Well, there you have it --another reason to notice that there is a natural bias on this planet.

A bias that informs us that civilization must seriously think about natural nomadic behavior from time to time (On The Origin and Future of Nomads).