Economic War Of The Pacific - 2 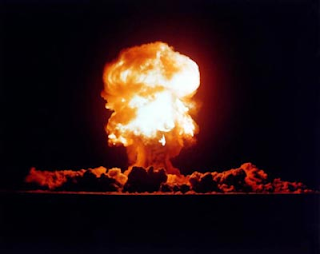 This mindless policy which began in earnest with the neoCon infested Bush II Administration, we have complained, has been perpetuated by the Obama Administration.

When nations are pushed so that their backs are up against a wall, and our policy affords them no leeway, they tend to take steps that are not in the interests of all concerned.

For example, one of the Bush II "diplomacy" ideas involved putting missiles into Poland, near the Russian border, while claiming they were to protect Europe from an Iranian missile attack.

Likewise, the Obama Administration, as a form of "diplomacy", is pushing Russia on its Syrian policy, which also impacts China since it also supports Syria and Iran.

This is leading to some potential challenges for future naval strategy:


China will join Russia later this week for its largest-ever naval drills with a foreign partner, underlining deepening ties between the former cold war rivals along with Beijing's desire for closer links with regional militaries.

China has long been a key customer for Russian military hardware, but only in the last decade have their militaries begun taking part in joint exercises.

China's defence ministry said on Tuesday that its navy would send four destroyers, two guided missile frigates and a support ship for the exercises, which start on Friday in the Sea of Japan and run until 12 July.

The ships departed on Monday from the port of Qingdao, where China's Northern Fleet is based, and headed for the rallying point in Peter the Great Bay near Vladivostok.

"This marks our navy's single biggest deployment of military force in a China-foreign joint exercise," the ministry said.

(China to Join Russia for Largest Naval Drills). Regular readers know that Dredd Blog has pointed out the inherent dangers involved with escalations in warmongering, jingoistic rhetoric (The Most Dangerous Moment in Recorded History).

But there is also a danger that economic impacts, which are not in American interests, could be an unintended consequence of senseless hubris in foreign policy:


“The 21st century will be a contest for supremacy in the Pacific because that’s where the growth will be,” Lee said. U.S. President Barack Obama, he said, must understand this.

“If you do not hold your ground in the Pacific you cannot be a world leader,” Lee said, “That’s number one.”

“Number two, to hold ground in the Pacific, you must not let your fiscal deficits and dollar come to grief,” he said.

(Economic War Of The Pacific). It does not appear that alienating two important powers then having them react negatively to American interests is a workable policy.

Not in the long run anyway (Phase Four Of The Currency Wars?).