We have been following the debacle of President Obama's team Oil-Qaeda as they have made war on the Arctic Wilderness.

In the Dredd Blog post Sanity Can't Win For Losing (5/14/10) it was pointed out that environmentalists had sued Royal Dutch Shell in federal court to stop the Arctic attack, and that the case was brought because various watchdog organizations, such as Oceana, saw that environmental protections had not been put in place, and probably couldn't be.

The Ninth Circuit Court of Appeals couldn't see that far ahead so it allowed the drilling to go forward, ruling against the environmentalists (ibid).

Next, President Obama went to bat for Oil-Qaeda by issuing orders to expedite the effort to drill in the Arctic because "America had decided" to drill baby drill:

(Hottest Month (July) on Record). Then the safety system designed to go into action if any Deepwater Horizon event should develop crashed and burned:


Four weeks ago, on Saturday, September 16th [2012], in clear, calm, warm summer weather on Puget Sound, something happened while Shell Oil was testing its new, post-Deepwater Horizon oil blowout containment dome.  The dome system was being deployed during a certification test being performed by Shell, its agent in the refurbishment and system makeover of the 35-year-old barge, Arctic Challenger, Superior Marine Technical Services, the U.S. Coast Guard, and the U.S. Bureau of Safety and Environmental Enforcement (BSEE).

Something happened. The test failed miserably, and the containment dome was severely damaged.

(What Really Happened, emphasis added). That piece goes on to explain that even though a safety mechanism had not been developed and tested, the feds had already allowed the drilling in the Arctic to proceed.

Meanwhile, the drilling in the Arctic lasted one or two days before the "Arctic Challenger" and the "Kulluk" had to run for the border in the face of Arctic dangers (ibid).

Then, while on the run from the Arctic extremes the Kulluk legacy was destroyed as it was driven aground on Sitkalidak / Kodiak Island, and was being battered by 30-50 foot waves:


The Royal Dutch Shell ship, the Kulluk, which was used in the Arctic last summer, ran aground on Monday on a sand and gravel shore off 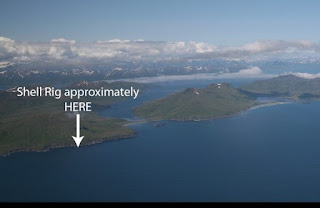 an uninhabited island near Kodiak Island in the Gulf of Alaska.
...
US Representative Ed Markey, the top Democrat on the House Natural Resources Committee, issued a statement on Tuesday expressing his concerns about the situation. "Oil companies keep saying they can conquer the Arctic, but the Arctic keeps disagreeing with the oil companies," Markey said. "Drilling expansion could prove disastrous for this sensitive environment."

We now know that incompetence in both of those areas of policy render security non-existent to the degree that catastrophe of some sort can be reasonably expected.

Eventually, an evaluation team boarded and observed the Kulluk but what they found is being guarded and kept secret (story here).

And finally, the drilling rig was forcefully towed to a safer harbor, for further damage evaluation.

The next post in this series is here.
The Kulluk ran aground about 60 miles south of Kodiak, Alaska following a storm. Another storm coming towards it.