Over the past decade, during the Bush II administration, U.S. foreign policy went back in time to the era of gunboat diplomacy.

Over several decades prior to the advent of the Bush II foreign policy, much ideological ground had been gained by civil discourse and economic interaction toward global prosperity and peace, conducted by the diplomatic corps of The United States of America ... gains which had been carefully and skillfully developed over sophisticated diplomatic inroads, utilizing the techniques of modern civilized professional diplomacy, which eventually extended all the way from Russia, to China, and even to the Middle East.

Almost everywhere ratings, approvals, and acceptance of the U.S. was high, robust, and for the most part favorable, reaching a peak in this month of September of 2001 following the 9/11 attacks ("We are all Americans now" - French Leader).

It was a time to take careful aim, to build upon our national popularity and prosperity around the globe, but before taking aim the neoCon warmonger elements within the nation seized our foreign policy in what the general who commanded NATO forces called a coup:

Some hard nosed people took over American policy and they never bothered to inform the rest of us."

(A Tale of Coup Cities, quoting Gen. Wesley Clark). Immediately following the foreign policy coup, they shot before taking aim, and the wars they started are still going or being discontinued.

Much was lost or severely eroded in terms of the image of the U.S. by the knee-jerk reactions and policy changes they forced on America and the world:


Since then, polls conducted by the U.S. Government and respected private firms have revealed a precipitous decline in favorability toward the United States and its foreign policy. The generally positive ratings from the 1950’s to 2000 moved to generally negative after 2002. As the very first witness in a 10-hearing series with pollsters and regional analysts told the Subcommittee — “We have never seen numbers this low.”

The reversal is unprecedented and widespread ...

(Decline of U.S. Reputation - Why?). Eventually the madness of the neoCon policy coup became ever so obvious by a statistic comparing marching bands to diplomatic bands:

(Is The Empress Taking Off Her Clothes?, quoting NY Times). It is little wonder that the good will the U.S. had in the world eroded as the jobs in the diplomatic corps dried up in the bloodlust for wars and more wars.

Their gunboat ideology, taken from the 18th century, is described as: 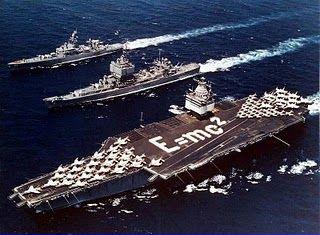 The term ["gunboat diplomacy"] comes from the period of colonial imperialism, where the European powers would intimidate other states into granting trade or other concessions (unequal treaties) through a demonstration of their superior military power. A country negotiating with a European power would notice that a warship or fleet of ships had appeared off its coast. The mere sight of such power almost always had a considerable effect, and it was rarely necessary for such boats to use other measures, such as demonstrations of cannon fire.

(Wikipedia, Gunboat Diplomacy). We discussed the issue in graphic terms about the re-activation of the Fourth Fleet:


The 5th Fleet together with troops are in the Middle East where there is lots of oil.

The 4th Fleet has been reactivated after 58 years of being moth balled, and has been sent to Central / South America where there is also lots of oil.

(The Fleets & Terrorism Follow The Oil). We have also mourned the fact that this policy, which we call "The W Direction", has been followed up on too much by the Obama Administration:


Of course it was only coincidence that the Brazilian oil discovery in late 2007 (the world's largest find in 30 years) was quickly followed by the reactivation of the U.S. Navy's 4th Fleet that had been mothballed for 58 years.

It was only further coincidence that the 4th fleet went south to end up anchored around and about that "Brazilian" oil field.

Oh and yes it was another coincidence that Obama announced the invasion of Libya, the country with the largest oil reserves in Africa, on the day he arrived in oil rich Brazil.

(The Fleets & Terrorism Follow The Oil - 2). This gunboat diplomacy has come back to haunt us, as we pointed out in yesterday's post, concerning the destruction and attacks on various U.S. Embassies (Oil's Well That Ends Well - 3).
"It's been a long time coming":