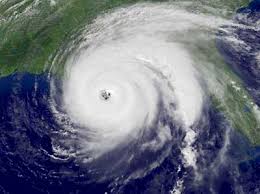 Some will remember the opinion displayed on some blogs on the Internet, by both commenters and posters, to drop a nuclear weapon on the Deepwater Horizon leak in the Gulf of Mexico in 2010.

People actually thought that a thermonuclear bomb would solve all the problems of that catastrophic oil spill, seal the ocean bottom, then we could "get our lives back", and go back to driving our gas guzzlers along the coastline of Alabama and Mississippi.

You may wonder where such absolute lunacy and hogwash comes from.

I did too, so I did some research.

Here is a post on this date in 2009 showing that originally officials came up with the idea to use nuclear weapons as a way to stop hurricanes:
The type of vision I am talking about in this instance is not eyesight.

Instead I am talking about the ability to foresee events and the consequences of behavior. For example, we know that hurricanes eventually disrupt, destroy, kill, or maim both sophisticates in cities and sophisticates in the countryside. But they begin as a tiny, twirly eddy in the mountains of Africa.

Then they grow out of their embryonic state when they reach the womb of the Atlantic Ocean:


"A lot of hurricanes start out over the Ethiopian mountains. Air is steadily flowing over those mountains and they cause waves in the air. We're going to have Mobil radars and aircraft flying through those waves," explains Owen Kelley, a NASA researcher.

One of those waves made its way to the Chesapeake Bay and turned into Hurricane Isabel.

(WJZ, emphasis added). The mountains of Ethiopia, not the east coast of Florida, is where the egg is fertilized, if you will.

Yet, when weather scientists or meteorologists long ago had the notion to control hurricanes in some way, their plans involved waiting until they were monsters. So nuclear weapons and various chemicals were their "medicine" of choice.

One wonders why they did not think of coal mining the tops off the African mountains, or nuking those mountains? Just call it a pre-emptive strike based on national security? Was it not done because "doin' a heckuva job" was the rage then? Who knows.

Anyway, dealing with the cause or source of a problem rather than dealing with its eventual effects once they have become monstrous somehow escaped them.

There was a lack of vision or foresight, which in the "old days" was called "nipping it in the bud". Deal with a problem when it is a tiny bud instead of waiting until it threatens your very life is the basis of that saying.

In general we tend to not deal with life threatening or liberty threatening problems that way because there is a severe lack of vision in our society at the political level. The next election is usually as far as the thinking goes.

One exception to this rule is that diplomacy, a form of vision, is returning this year with the election of the Obama Administration.

It is a refreshing development after almost a decade of diplomatic demise, and the resultant surge of militarism.

But the return to diplomacy is not because all of a sudden the politicians waxed diplomatic on their own.

It is because the militarism wreaked havoc on the economy and on our world reputation, so the people voted the hawks out.

Email ThisBlogThis!Share to TwitterShare to FacebookShare to Pinterest
Labels: incompetence