The Bleep Goes On 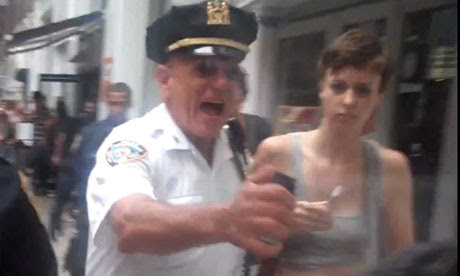 It was eerily soon after Dredd Blog had posted The Homeland: Big Brother Plutonomy when the Occupy Wall Street Protests began.

And soon after that the police brutality, which Dredd Blog anticipated in that post, began.

In this case the media is doing a more respectful job of reporting the Orwellian attacks on peaceful protesters, who have the support of The Court of Public Opinion.

Yesterday, we posted a video of Lawrence O' Donnell on MSNBC's Last Word, condemning the fascist attacks on American citizens.

The international media is also picking up on the brutality of the police who are doing the puppet work of the plutocracy:

According to recent statistics, 1722 people complained of being wrongfully pepper-sprayed by New York police officers between 2006 and 2010. Of that number, the civilian review board substantiated just 22 complaints.

(Guardian). The following videos are more instances of police brutality committed against American citizens doing peaceful demonstrations:The protests have gained some new support from substantial sources.
Posted by Dredd at 10:28 AM