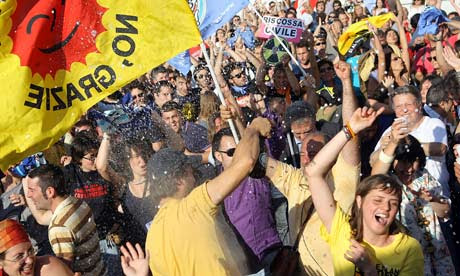 Why can't the USA do what other nations can do?

Including remarkable achievements which two nations in Europe have now done?

Germany recently decided to reject nuclear power generation because it is a grave danger to the population.

Now Italy has done the same by a major election landslide:


The anti-nuclear movement won a crushing victory in Italy on Monday when well over 90% of voters rejected Silvio Berlusconi's plans for a return to nuclear power generation.

(Guardian). For another example, Bolivia is on track to be the first nation to give the environment civil rights.

Meanwhile, the USA plods onward toward danger after danger because of an inability to do the proper thing anymore.

If it does damage to the Earth, humanity, and the economy the USA seems to be unable not to be like the proverbial moth around a flame. 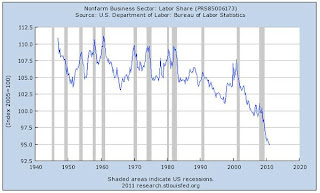 The graph to the right shows the labor share of non-farm business since 1947 until Q1 of 2011.

You can look at it on the Federal Reserve website, along with other information about the statistics.

Be sure to also read The Graphs of Wrath showing a skyrocketing military economy concurrent with a nose-diving domestic economy.
Posted by Dredd at 10:28 AM