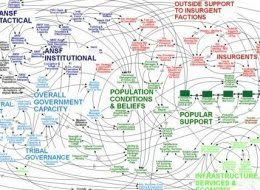 The graphic to the left is a War College map of the way out of Afghanistan, which is remarkably unlike the simple way in.

I guess the birds ate all the bread crumbs that Hansel and Gretel dropped to mark the way back, especially if we recall some of the original maps that were displayed to show us how easy it would be, in the Wayback machine, for ingress and egress.

Evidently the White House has been quite impressed with the intellectual aura of it all.

Today Margaret Carlson on MSNBC's Morning Joe said that General Patraeus "owns the White House" when it comes to Afghanistan, and everyone chimed in to acknowledge that factoid.

On Sunday David Spin will interview David Commander (in Chief) in Afghanistan to explore the Broadway approach to "withdrawal".

The interview was fronted as if they were talking about kicking a habit down the road, because we know that Broadway is the street that leads to War Street, which leads to Wall Street, where the pavement, lights, side walks, homes, jobs, and everything else that used to be on Main Street have been taken.
Posted by Dredd at 8:10 AM