Another Sign of Another Layer in the Oil Wars? 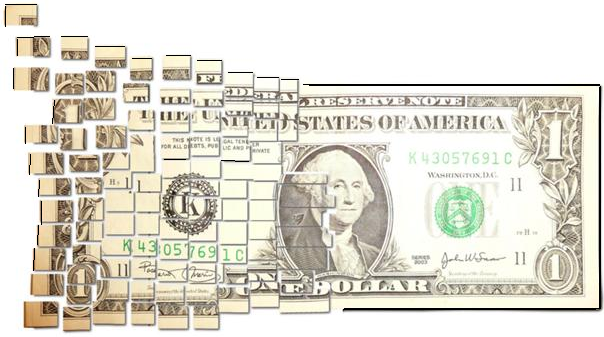 Perhaps the title of today's post should be "Honey, I shrunk the Petrodollar."

Let's speculate on a couple of events taking place within a long line of events that have and will continue to have global impact.

There is speculation that Saudi Arabia's continuation of its oil production levels (rather than easing up so that oil prices will stay high) and lowering some prices (rather than letting market forces determine price) is part of a larger strategy.

Was it aimed at Russia's oil competition, the U.S. fracking surge, or mid-eastern nations that do not have the "proper Islamic faith?"

Technically, the Saudi's can pull a barrel of oil out of the depths at about $30 per barrel, while its competitors I just mentioned tend to have to spend as much as double that or more (e.g. @fracking).

There is a lot of scuttlebutt about what the Saudi thinking means, but as a cautionary tale, remember this:


Back in March 1999 "The Economist" magazine carried a cover photo of two men drenched in oil as they attempted to close a faulty valve that was spraying a huge stream of crude skyward. Over the photo was the headline: "Drowning in oil." At the time it really did seem as if the world were drowning in oil.

The previous December crude oil on the New York Mercantile Exchange touched $10.72 per barrel. That month U.S. gasoline prices averaged 95 cents per gallon. "The Economist" opined that oil might go down to $5 per barrel.

But, of course, in retrospect the magazine's cover proved to be the perfect contrarian indicator, for oil had already begun its historic ascent toward $147 per barrel. The 2008 price spike was the culmination of a 10-year bull market that had begun in December 1998.

(Oil Price). That said, one can see that fracking prices and Canadian tar sands extraction costs (analysis here) is scary-close to the about $77-$85 bbl. sales price, and could shake things up:


Oil prices tumbled to their lowest point in more than two years after Saudi Arabia unexpectedly cut prices for crude sold to the U.S., likely paving the way for further declines and adding to pressure on American energy producers.

The decision by the world’s largest oil exporter sent the Dow industrials into negative territory for the day amid concerns about the pace of global growth.

The move heightened worries over the resilience of the U.S. oil industry, which has expanded rapidly in recent years. But that growth, driven largely by new production technology used to extract oil from shale-rock formations, has never been tested by a prolonged slump in prices.

Meanwhile, Saudi Arabia raised the prices for its oil in other locations, including Asia, where the country had cut its prices for four consecutive months.

(WSJ, emphasis added). At any rate, these possible price wars between oil producing nations could be eclipsed by something else that has less fluctuation, and has been gaining speed and strength.

These paper struggles can be as devastating as actual shooting wars in some cases, so recent events are worth watching:


Energy-exporting countries are set to pull their "petrodollars" out of world markets this year for the first time in almost two decades, according to a study by BNP Paribas.

Driven by this year's drop in oil prices, the shift is likely to cause global market liquidity to fall, the study showed.

Brent crude futures have fallen 23 percent this year, with 2014 promising to be only the second year since 2002 that crude prices will end the year lower than they began it. 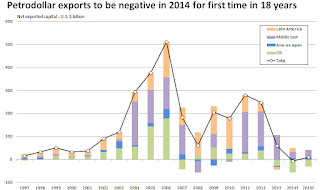 This decline follows years of windfalls for oil exporters such as Russia, Angola, Saudi Arabia and Nigeria. Much of that money found its way into financial markets, helping to boost asset prices and keep the cost of borrowing down, through so-called petrodollar recycling.

But, perhaps some squeals in posts from Jim Willie are half worth reading (Shanghai Shock to Shatter the Gold Market!, The Economic ENDGAME Has Arrived, The Crash Heard Round the World- Saudis to Reject USD for Oil Payments).

Don't buy anything from them, just ponder their (maybe shrilly, maybe not) rhetoric indicating that something is afoot (could be a scam).

Then, as usual, you decide.

The next post in this series is here.
Posted by Dredd at 10:08 AM