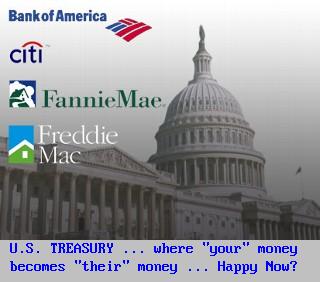 This series about the U.S. plutonomy within the U.S. Plutocracy, combined with the series about the plunder of the treasury (see "PLUNDER" on the Series Posts page) have laid out how the middle class and poor have been plundered since 9/11.

These series point out, among other things, that one event which made the plunder of the citizenry possible was the eradication of various consumer protection and/or banking laws which had made the old style robber baron machinations of the last century illegal, and that the removal of those good laws gave rise to another age of plunder (see the series Bush II Eradicated The Robber Barons).

Today we will look at some of the evidence and expert testimony to show what the banksters have said behind closed doors and in public.

One piece of that evidence has caused quite a stir, including threats from large law firms, is "The Plutonomy Memos", which will be quoted from in today's post.

Additionally, the video at the bottom of this post features expert William K. Black adding his perspective concerning these memos and related issues.

Before we view some quotes from the memos, let's remember that the street name for the U.S. Plutocracy is "1% vs. 99%", made into a household name by the Occupy Movement, but originally made infamous by CitiGroup:


Well, here goes. Little of this note should tally with conventional thinking. Indeed, traditional thinking is likely to have issues with most of it. We will posit that: 1) the world is dividing into two blocs - the plutonomies, where economic growth is powered by and largely consumed by the wealthy few, and the rest. Plutonomies have occurred before in sixteenth century Spain, in seventeenth century Holland, the Gilded Age and the Roaring Twenties in the U.S. What are the common drivers of Plutonomy?

2) We project that the plutonomies (the U.S., UK, and Canada) will likely see even more income inequality, disproportionately feeding off a further rise in the profit share in their economies, capitalist-friendly governments, more technology-driven productivity, and globalization.

3) Most “Global Imbalances” (high current account deficits and low savings rates, high consumer debt levels in the Anglo-Saxon world, etc) that continue to (unprofitably) pre-occupy the world’s intelligentsia look a lot less threatening when examined through the prism of plutonomy. The risk premium on equities that might derive from the dyspeptic “global imbalance” school is unwarranted - the earth is not going to be shaken off its axis, and sucked into the cosmos by these “imbalances”. The earth is being held up by the muscular arms of its entrepreneur-plutocrats, like it, or not.
...
4) In a plutonomy there is no such animal as “the U.S. consumer” or “the UK consumer”, or indeed the “Russian consumer”. There are rich consumers, few in number, but disproportionate in the gigantic slice of income and consumption they take. There are the rest, the “non-rich”, the multitudinous many, but only accounting for surprisingly small bites of the national pie.

(The Plutonomy Memos, part 1, pages 1-2, emphasis added). Those four points are not all of the points set forth in that memo, but they backup the gist of this Dredd Blog series.

A series that has attempted over and over to show readers that the discussions in the media about the "economy" might as well be taking place on the planet Mars, because in the U.S.eh? we do not have an "American economy", we have a plutonomy within a plutocracy (e.g. Who Are The Job Creators?).

The U.S. Plutocracy and Plutonomy is discussed by former bank regulator William K. Black (begins at 1:11 after introduction):