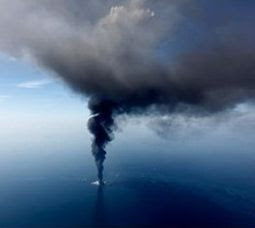 For example, in the post New Government Climate Change Policy: Triage we pointed out that governments would morph into hyper-selfish entities.

This new body of policies is developed surreptitiously by the warlords of civilization, led by an indispensable nation.

We pointed out in the post The Indispensable Nation For Global Nihilism that the essence of that policy, the heart and core of it, is actually nihilism, an insurrection against the natural laws of the cosmos.

Listening to the people who live along the Gulf Coast today 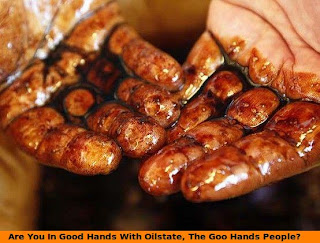 , one gets the firm impression that Dredd Blog was "spot on" in the assessment of the future of response to disasters and catastrophes brought on by the hydrocarbon wars.

The hydrocarbon wars are being fought on three fronts: 1) the war front where MOMCOM fights for possession and control of civilization's main drug hydrocarbons (oil, gas, coal), which involves the oil wars; 2) the phony nuclear power front that speaks only the language Chernobylese; and 3) the war front against the environment which is causing another series of increasingly deadly catastrophes through the inducement of climate change.

On the anniversary of the Deepwater Horizon catastrophe, that assessment still holds water, the oily toxic water of MOMCOM.

A year later following Dredd Blog criticism of MOMCOM in the Gulf, the propaganda machine of MOMCOM is still lying through its propaganda stained teeth 24/7.

The people along the Gulf of Mexico and the gulf itself still suffer from the mother of great catastrophes, MOMCOM, who likes to sh*t where we eat.
Posted by Dredd at 5:48 AM