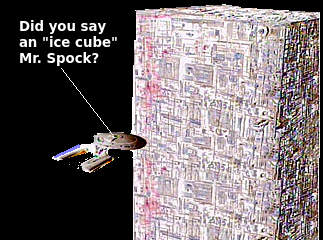 How big is a cube 500 kilometres on each side?

It is about the same as a cube 311 miles on each side.

It would reach past the International Space Station orbit (258 miles) by 53 miles.

So what is that big?

The cube of ice melting each year from Greenland & Antarctica ice sheets is going to be that big, but is already causing the sea level around us to rise.

It is the number one danger to national security, according to the President and the Pentagon (What Do You Mean - World Civilization? - 2).

So, why don't we hear as much about the annual ice cube melt into the oceans?

Is McTell News irrelevant to the real world, and only interested in the world that the Plutocracy, the Corporatist 1%, yes, that Oil-Qaeda wants us to know about?

That is the way The Father of Spin put it (The Ways of Bernays).

The "free press" morphed into presstitutes long ago, and they now walk the streets peddling the wares of the Epigovernment, instead of the government of the people, by the people, and for the people.

"How quaint" and "let them eat cake" won't last long.

The deniers are only experiencing the "freedom" a puppy thinks it has as it runs full speed away from its handler.

So happy to be "free" --until the end of the leash looms large.

An abrupt change is inevitable when the ice is melting at such an unprecedented rate, and especially so when that melt is accelerating (Will This Float Your Boat - 7).