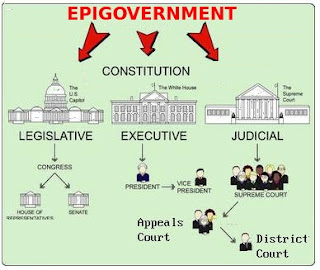 An earlier Dredd Blog post had a graphic to show the structure of the U.S. Federal Government.

That graphic has been modified for this post so as to illustrate the concept of "epigovernment."

For the purposes of this post "government" means the realm of officials who are elected into office, as well as those they then hire or appoint to non-elected offices.

It also means what those government officials do while on official business.

And finally, for the purposes of this post, "epigovernment" means the layer above government that actually sets the policy and direction of government.

Thus, epigovernment is a concept like epigenetics in the sense that epigenetics is "above genetics," because epi means "above" or "over" in this context, which is a context declaring that genes are no more controlling (see The "It's In Your Genes Myth) than government is (see MOMCOM: The Private Parts - 4).

Thus, epigovernment is to government what epigenetics is to genetics.

The premier American propagandist Edward Bernays described the concept of the epigovernment quite well:

(A Closer Look At MOMCOM's DNA - 4, quoting Bernays). In this concept the tentacles of the epigovernment reach the people through the mechanism of the media:

And one of the striking features of the modern period is the institutionalization of that process, so that we now have huge industries deceiving the public — and they're very conscious about it, the public relations industry. Interestingly, this developed in the freest countries—in Britain and the US — roughly around time of WWI, when it was recognized that enough freedom had been won that people could no longer be controlled by force. So modes of deception and manipulation had to be developed in order to keep them under control"...

(The Deceit Business, quoting Chomsky). The way the epigovernment is able to direct government is also known, which is control through the use of the power of wealth, i.e. through money.

That money is controlled by known international corporations that own stock in each other so as to "keep it in the family":


A University of Zurich study 'proves' that a small group of companies - mainly banks - wields huge power over the global economy.

The study is the first to look at all 43,060 transnational corporations and the web of ownership between them - and created a 'map' of 1,318 companies at the heart of the global economy.

The study found that 147 companies formed a 'super entity' within this, controlling 40 per cent of its wealth. All own part or all of one another. Most are banks - the top 20 includes Barclays and Goldman Sachs. [Bank of America is in the top 25]

(MOMCOM: The Private Parts - 3, quoting Daily Mail & report, emphasis added). This concept of epigovernment should probably be a required chapter in Civics Textbooks, because the physical dynamics can be observed, measured, studied, and discussed in pre-college classes as well as in university level classes.

Terms like "global economy" can be explained to civics and economics students via the concept of a plutocracy, which is the essence of the global epigovernment.

Another good thing about the concept of epigovernment is that it can be taught without getting into boogie man "conspiracy theories" that tend to scare properly trained citizens away.

The next post in this series is here.
Maybe not as American as you think ...