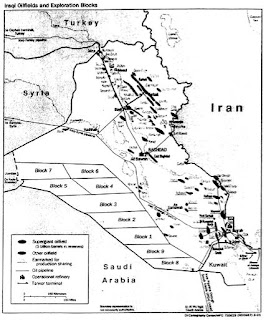 One of the first things Dick Cheney did as Vice President, was to call a meeting in 2001 of the oil barons of MOMCOM, who got together in what was called an "Energy Task Force".

It was to be expected that the press and/or the public would be interested in what their federal government was doing, so a problem arose when the Vice President declared that he wanted to keep it all entirely secret.

So lawsuits arose under the Freedom of Information Act (FOIA), and those cases went all the way to the Supreme Court, where Cheney substantially prevailed.

Thus began the ignorance of the public about what was really going on under the Energy Task Force's secret shadow, with secret plans, secret deliberations, and secret decisions.

There is little wonder why some observers in the press and in the public concluded that those meetings were held to discuss the new offshore oil rig of the new American foreign policy.

The map of Iraqi oil fields at the top of this post, which was discussed in the secret meetings of the Energy Task Force, eventually became public, as did the subject matter of those secrets:


The Middle East with two thirds of the world's oil and the lowest cost, is still where the prize ultimately lies, even though companies are anxious for greater access there, progress continues to be slow - Dick Cheney (1999)
...

What people need to hear, loud and clear, is that we're running out of energy in America - George W Bush (2001)
...
The ... difference between North Korea and Iraq is that we had virtually no economic options with Iraq because the country floats on a sea of oil - Paul Wolfowitz (2003)
...
I am saddened that it is politically inconvenient to acknowledge what everyone knows: the Iraq war is largely about oil - Alan Greenspan (2007)
...
Of course it’s about oil, we can’t really deny that - General John Abizaid (2007)

People say we’re not fighting for oil. Of course we are. They talk about America’s national interest. What the hell do you think they’re talking about? We’re not there for figs - Republican Senator Charles Hagel (2007)

(Iraq's Oil: The Greatest Prize Of All?). Later during times when the public and press were wondering how much oil Iraq really had, this was asserted:


Iraq may have oil reserves of 350 billion barrels, Deputy Prime Minister Barham Salih said on Monday, a massive figure that is triple the country's proven reserves and which even exceeds the oil in Saudi Arabia.

(Reuters, 2008). The Dredd Blog series, which today's post belongs to, has quoted various sources from various nations, businesses, and disciplines to make it perfectly clear to those who want to know, that The Peak of Oil means an eventual Peak of the Oil Wars in the fairly near future.