The Question Is: How Much Acceleration Is Involved In SLR? - 3 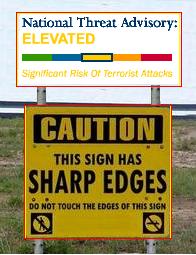 In the post The Evolution of Models - 2 I quoted  from a paper by the Potsdam Institute (Potsdam).

That Potsdam paper hypothesized that for every 1 deg. C that global average temperature (GAT) increased, there would be a resulting 2.3 m of global sea level rise (SLR) to follow.

The problem I now have with them is that, since they indicate that it could take an inordinate amount of time for that to manifest, now I wonder where their evidence really is.

So the quest for a workable figure for ongoing acceleration continues, because they give no useful way of testing their hypothesis by observation in the here and now (especially when they imply that their scope involves hundreds of years).

For example, if we take the current increase in global GAT of about .85 deg. C since 1750, then apply the Postsdam ratio to it, we derive:

Their work is, by itself, useless in practical terms because it has no significant meaning in the relevant time frames of 85 years (from now until 2100).

And its application is off by an order of magnitude from the observed (.007 vs. .0007), so it is impractical on its own, in the sense of not having been intended to be timely.

(The Question Is: How Much Acceleration Is Involved In SLR? - 2). The issue of doubling (acceleration) has been shown to be an observable reality.

This I already discussed in the context of new satellite data:


Measurements from ESA’s CryoSat mission have been used to map the height of the huge ice sheets that blanket Greenland and Antarctica and show how they are changing. New results reveal combined ice volume loss at an unprecedented rate of 500 cubic kilometres a year.
...
The resulting maps reveal that Greenland alone is reducing in volume by about 375 cubic kilometres a year.
...
The researchers say the ice sheets’ annual contribution to sea-level rise has doubled since 2009.

Glaciologist Angelika Humbert, another of the study’s authors, added, “Since 2009, the volume loss in Greenland has increased by a factor of about two and the West Antarctic Ice Sheet by a factor of three."

(Will This Float Your Boat - 5). Thus, the doubling which Cato The Wise criticized as hubris, when spoken by James Hansen, is not a myth, no, the doubling (acceleration) is scientific fact.

The only question remaining is: "will the current observed doubling hold up, go away, or will it even double itself ?"

It is clear that Cato The Wise is not influential with scientists who work with public works professionals on practical problems, because practical scientists (unlike bought off Cato The Wise hacks) see the SLR catastrophe approaching and realize it is quite serious (ibid).

Thus, as this series asks in its title, "How Much Acceleration Is Involved In SLR", acceleration is the nitty gritty essence to grok SLR (Will This Float Your Boat - 5).

Our grandpa, father, and big brother's science textbooks had no notion of acceleration.

Like Cato The Wise and the IPCC did or still do.

The comprehensions of the past were based on linear projections which are now known to be scientific myth:


As global temperatures increase, the melting of the massive ice sheets that blanket Antarctica and Greenland has accelerated, making a significant contribution to sea-level rise.

Before 2000, indications were that these two ice sheets were generally stable, at least in their interiors. However, it is now known that the ice caps are melting at their base, caused by warming oceans.

(Ice Sheets, Cryosat-2, emphasis added). This is a very recent satellite effort, which makes me wonder why, why, why, now.

I mean, we have been warned of polar ice melt danger since Dr. James Hansen warned of it in 1988 during an open appearance before congress.